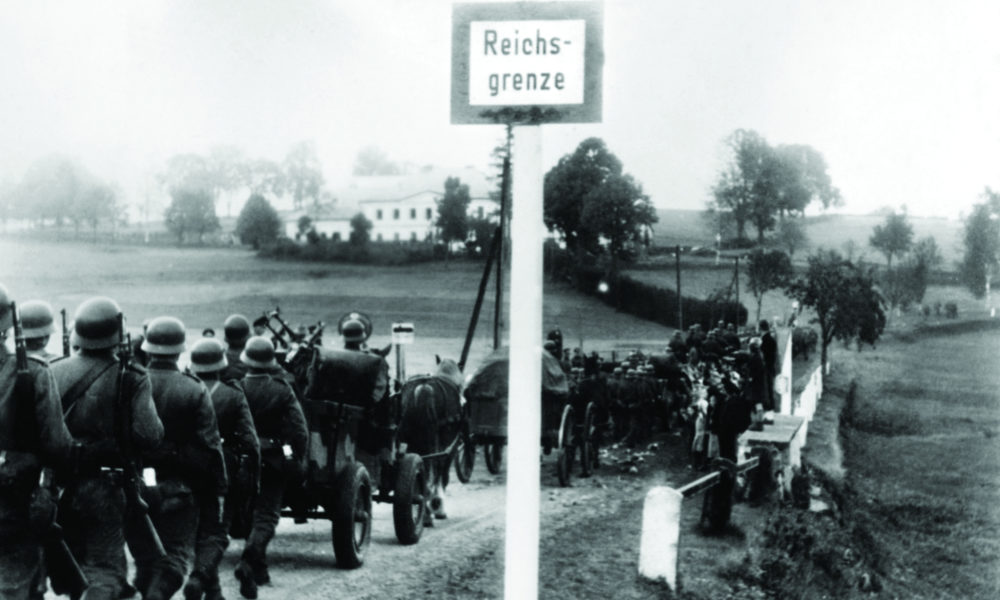 THE ROAD TO WAR

In light of a brilliant new book on the subject, Bruce Anderson considers the complexities of the argument around appeasing Hitler 81 years ago

Appeasement was the most contentious issue in British political history. It gave rise to quarrels that lasted for decades and had a major impact on election results, especially in 1945. As is often the case when history impinges on current politics, most of the arguments generated far more heat than light. Perhaps only now can dispassion prevail, with the help of an outstanding new book. Appeasing Hitler: Chamberlain, Churchill and the Road to War is Tim Bouverie’s debut, and a compelling one.

His opening sentence provides historical context and should embarrass the facile critics of appeasement: “The desire to avoid a second world war was perhaps the most understandable and universal wish in history.”

Over 16 million people died in the First World War. In the UK, the figure was almost 750,000. Casualties on that scale affected virtually every family in the land. The people who had not lost a close relative knew others who had. Think of those pals’ battalions, often recruited from Northern towns, whose young men did not wait to be conscripted but fell in behind the band, marched off cheerfully together, trained together, fought together and often died together. Forget the mythical Angel of Mons. It was as if the Angel of Death had swooped upon those towns, leaving behind a pall of grief and life-long heartbreak.

That was heart-rending. Worse still, it created the conditions for further heartache. After the war to end all wars, peace was supposed to create a land fit for heroes. By the 1930s, those prospects became increasingly distant. There was little heroic on the home front in Britain, and on the Continent, ancestral voices never stopped prophesying war. The term ‘appeasement’ came into the diplomatic vocabulary, but in the early days it was merely a gentle-sounding word, expressive of a desire to make peace. Anthony Eden was happy to use it.

It is easy to understand such longings, as Bouverie makes clear. There was a widespread assumption that any future war would be even more terrible than its predecessor. The miseries of trench warfare would be reinforced by the horrors of war from the air. Stanley Baldwin warned the public that the bomber would always get through. Estimates of likely casualties from bombing turned out, thank God, to be considerably exaggerated. But in the 1930s, it was widely expected that great cities would be pounded into rubble while another generation of young men went to the slaughterhouse.

The case for appeasement had two key reinforcements. The first was the belief that Germany had been treated too harshly in the Treaty of Versailles. As a result, a lot of the British public felt guilty about Germany, just at the wrong moment. Guilt and the resulting desire to make amends might have appeased any other German leader: not Adolf Hitler.

But there appeared to be another reason to make peace with Hitler. Bolshevism was not only turning Russia into a giant Gulag. The Communists had allies in every European country. Hitler dealt with his Communists and in those early days it seemed impossible that he could ever do a deal with Stalin. If he could help to protect Europe from Bolshevism, it was worth forgiving him a certain amount of rough-neckery at home. After all, Germany, unlike Russia, was a sophisticated European nation with a long history of high culture; powerful industrial, commercial and social elites; great universities; plus an army that could be a force for realism and stability.

After a lost war followed by Versailles; after the inflation of the 1920s, the Great Depression and the threat of Bolshevism; it was hardly surprising that a populist should come to power.

Yet surely there were forces in play to tame him. This was a man who wore white tie in the Führer’s box – formerly the Kaiser’s box – to hear Furtwängler conduct Beethoven. That did not sound like a monster from the gutter. 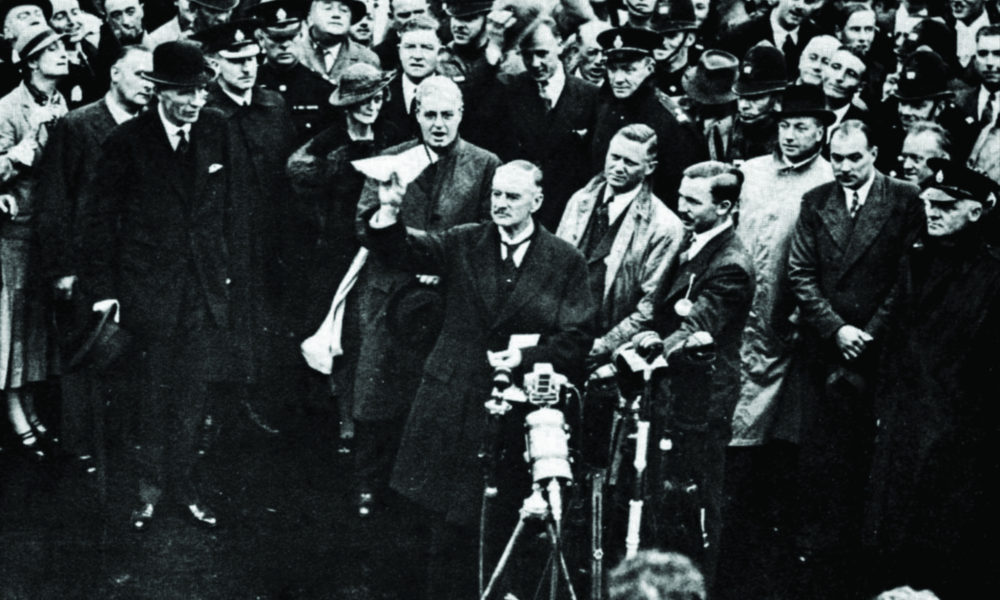 Neville Chamberlain arriving at Heston aerodrome on 30 September with the accord he signed earlier that day delivering, he said, “peace for our time”

British politics during the 1930s was a classic example of people finding reason to believe what they would like to believe. On the Left, intellectuals insisted that Stalin was trying to create a new civilisation. On the Right, less intellectual characters proclaimed that Hitler was trying to save civilisation from Stalin. Both sides were impervious to any facts that contradicted their theories.

In the middle, meanwhile, millions of decent people simply wanted to avoid another war. In 1933, the Labour leader George Lansbury wanted to disband Britain’s armed forces and dare the world to “do your worst”. In response to that lunacy, the Labour Conference of 1933 voted in favour of total disarmament, and a general strike in the event of war. In the same month, at the Fulham East by-election, a Tory/National Government majority of 15,000 lost to a Labour one of 5,000. The Labour candidate campaigned on pacifism and disarmament.

And in the Peace Ballot of 1935, an opinion poll that canvassed 38 per cent of the adult population, just over 9.6 million voted in favour of an all-round abolition of national military and naval aircraft by international agreement, with only 1.7 million against.

In recent years, there has been a tendency to play down the ‘great man’ theory of history, in favour of social and economic forces. But one cannot consider the history of the 1930s without acknowledging the decisive role of the two great men who ended the decade in a fight to the death: Hitler and Churchill. It is one of the most fascinating episodes in alternative history. What would the world have been like without them?

Hitler embodied absolute evil, and this explains his successes. He faced men who thought themselves too sophisticated for such a primitive notion; who insisted he was a product of social and economic forces, and therefore manageable.

There were a few exceptions, however. The diplomats, Sir Horace Rumbold and Sir Robert Vansittart, did not buy Hitler’s act, and knew appeasement would not work. But the key figure was Churchill. 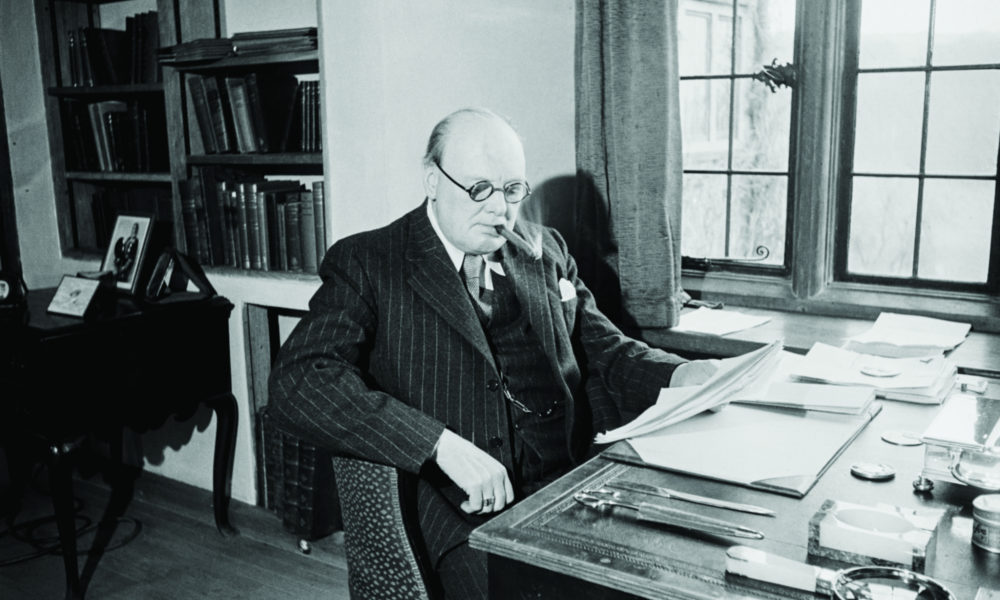 Winston Churchill seated with a cigar at his desk in Chartwell House in Kent in October 1939, shortly after his appointment as First Lord of the Admiralty in Chamberlain’s War Cabinet. In May 1940, he became Prime Minister

It may be that Churchill’s own demonic personality helped him to understand Hitler’s. If Churchill had been German, he too would have been ready to go to war to expunge the shame of defeat and the humiliations of Versailles. There the comparison ends. Hitler, the hell-hound, revelled in enslavement, the butchery of civilians and the Holocaust. A German Churchill would have been a Prussian militarist, but never a Nazi. The British Churchill, perhaps Britain’s greatest hero, understood that with Hitler, the only deal that would work was deterrence.

But this vital insight ran contrary to the public mood, as did Churchill’s own personality. By 1933, he had been at the forefront of British politics for 25 years. Everyone knew him, although not everyone trusted him. While Home Secretary, he arrived in person to oversee the siege of Sidney Street, when some anarchist gunmen were holed up in an East End house. That is not what Home Secretaries normally do. In the General Strike, he revelled in belligerence.

Then there was Gallipoli, the disastrous 1915 campaign in Turkey, which Churchill, as First Sea Lord at the time, had overseen and for which he’d bought the blame. Was it a strategic master stroke, ruined by incompetent execution, or a wasteful distraction? Interestingly, Labour’s Clem Attlee, who fought at Gallipoli, never criticised him for it. He too thought that it might have worked. But in the 1930s, that was a minority view. Gallipoli was widely cited as further proof of his unreliability. Many of his critics believed that his willingness to threaten Hitler did not arise from a cool-headed geopolitical assessment but from the passions of an inveterate war-monger; a bull who carried a china shop around with him.

There were other problems. Churchill had started his political career as a Tory before joining the Liberals and then, as he himself put it, re-ratting. But he never settled down to the easy loyalties of party tribalism. A lot of traditional Tories distrusted him. Many moderate Tories, who might have been ready to rise above the knee-jerk pieties of the Whips’ Office, were put off by his stance on India. In the 1930s, Churchill denounced any attempts to allow India to move towards self government. Forty years after he had been a subaltern in India, his views had not advanced towards sophistication.

Then there was the Abdication in 1936, by which time the clouds were darkening over Europe. Previous critics of Churchill were becoming less sure that he was wrong. But he did get the Abdication totally wrong. Edward VIII would have been a wholly unsuitable monarch, so thank goodness for Mrs Simpson. Churchill’s blind loyalty in a worthless cause, plus his drinking – never absent but often exaggerated – helped convince his colleagues that his formidable talents were impaired, because they did not include judgment.

That brings us to a man whose judgment was widely respected for most of his career. Neville Chamberlain was a tragic figure, in the Shakespearian sense: a man with great qualities, brought low by a fatal flaw. Chamberlain had been a good Health Secretary and a sound Chancellor who had helped to steer the British economy away from the rocks of recession. He had all the skills to be a considerable Prime Minister – in peacetime.

He could have said with Hamlet: “The times are out of joint/O cursed spite, that I was ever born to set them right.” But he lacked the self-knowledge to understand his own limitations – the ones that blocked him from understanding Hitler.

At Munich, Chamberlain did a deal, at the expense of the Czechs, and returned home a hero. Tim Bouverie thinks that he should have stood by Czechoslovakia, even if that meant war with Hitler. 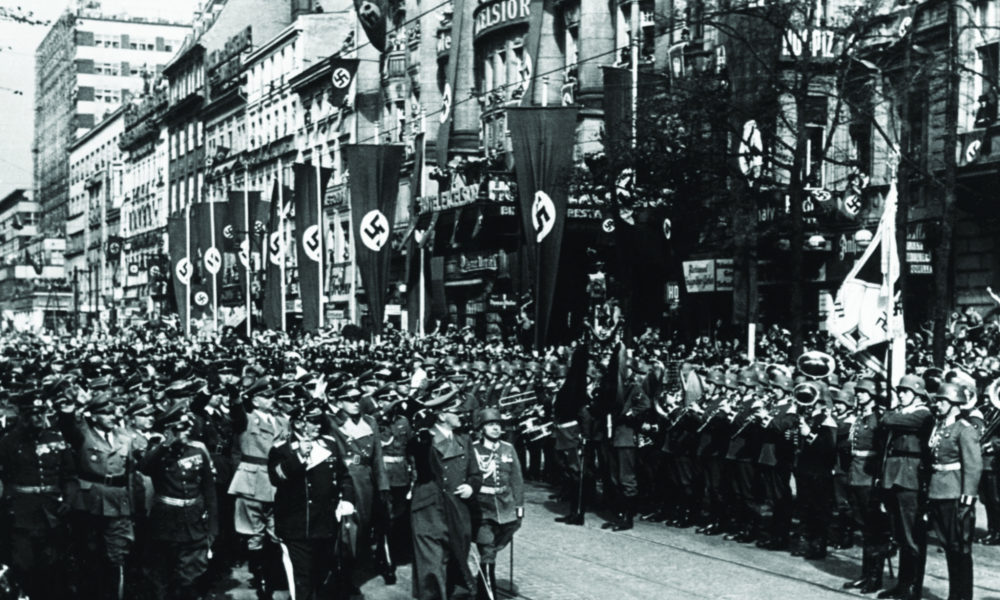 Hitler and Hermann Goering lead a parade through the city of Eger in the Sudetenland on October 10 1938.

The arguments are finely balanced. The Russians, potential allies, had no land frontier with Germany. Other nations would have been reluctant to allow Soviet troops passage. Once they were in, how would you get them to leave? The Czechs themselves had considerable military assets, on paper. But they would have faced sabotage from Sudeten German fifth columnists. Then there were the French, in no mood for war.

Perhaps if Britain had been resolute at this point, the German generals might have overthrown Hitler. One wonders. Some of them were mesmerised; few of them were natural rebels. There is also the argument that Germany gained more from the post-Munich delay than the UK did. We shall never know. On balance, after scrupulously reviewing all the evidence, Bouverie thinks that we should have fought. Chamberlain concluded otherwise, because he had convinced himself that he could do business with Hitler, on the assumption that the Führer was ultimately rational. Post-Munich, as evidence to the contrary mounted up, Chamberlain remained blinkered. He also expressed increasing vindictiveness towards the critics of appeasement – a very unattractive facet of his character.

Wholly committed to public service, a lover of the countryside and of field sports, there were so many admirable aspects to his personality. But it did end in tragedy. In Auden’s words, “History to the defeated/may say alas but cannot help or pardon.” Even so, those who read this book will see some grounds for leniency. And Bouverie’s balance, judgment and lucid prose make a compelling case.

“Appeasing Hitler: Chamberlain, Churchill and the Road to War” by Tim Bouverie is out now (Bodley Head, £20)