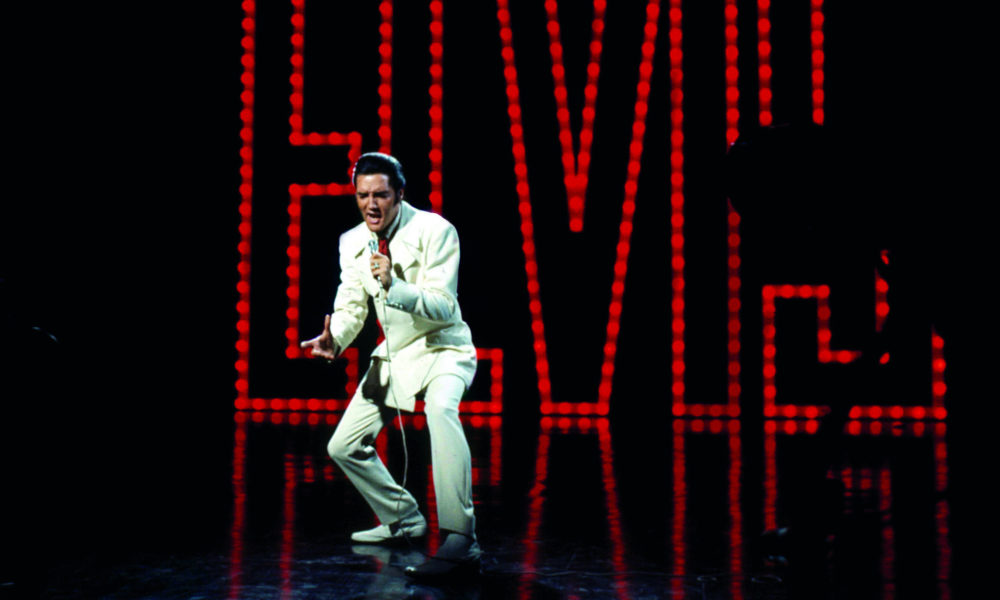 ALL HAIL THE KING!

By the 1960s and still a young man, Elvis’s career was in freefall. Jonathan Wingate explains how, fifty years ago this month, the singer pulled off the greatest comeback in music history

In the same week that the Beatles released the groundbreaking Sgt. Pepper’s Lonely Hearts Club Band, a schlocky Elvis movie, Double Trouble, opened in cinemas across America. Although he was only 33, Elvis knew full well that he had reached an all-time low point in his career when he shot a scene in which he imitated a clucking chicken while singing the children’s nursery rhyme, “Old MacDonald Had a Farm”. When you think of Elvis, three distinct phases instantly spring to mind: the lip-curling, hip-shaking, rock’n’roll rebel who changed everything from the moment he first burst into the spotlight in 1956; the bloated Las Vegas caricature of the 1970s; and sandwiched in between, the achingly cool, leather-clad Elvis in what became known as the ’68 Comeback Special.

Filmed in June at NBC’s studios in Burbank, California, and broadcast on 3 December 1968, Elvis, as the show was officially called, was his first television appearance since 1960. It had been seven years since he had last performed in front of a live audience and three years since he had last enjoyed a Top 10 single with “Crying In The Chapel”.

Elvis had returned from a two-year spell in the US Army from 1958-60 to discover that his infamously controlling and self-serving manager, Colonel Tom Parker, had tied him to a series of film contracts that would go on to almost ruin his reputation. By the late Sixties, his iconic early movies such as Jailhouse Rock and King Creole seemed a long way off, and he was starring in a seemingly endless run of forgettable personality vehicles such as Kissin’ Cousins and the aforementioned Double Trouble.

The most important musical foil to Elvis’ career, guitarist Scotty Moore, was by his side from his first audition at Sam Phillips’ Sun Studios on 5 July 1954 right up to the ’68 Comeback Special. Moore played on more than 300 Elvis songs and probably knew him better than any of his other collaborators. In a long and fascinating conversation we had before he passed away in 2016, it was clear that this kind, humble man did not have one bad word to say about anyone, with one exception.

“Parker was an old carnival character, so he was a hustler,” he recalled. “He was very controlling, so although he did a lot of things that were good for Elvis, he did a hell of a lot of things that were bad for him too. He’d go to the movie companies and ask them how much they wanted to pay. They’d say, ‘Well, for this one, we’re gonna pay $500 000,’ and he’d say, ‘That’s fine for me. How much are you gonna pay for Elvis?’ And he wasn’t kidding.

“He was working on Elvis’s mamma and daddy too. Elvis’s mamma knew who he was. She could see straight through him in a New York minute. Elvis didn’t listen, but when all this fame hits you at 19 or 20, what’re you gonna do?”

Like so many huge stars, fame proved to be fatal for Elvis. He seemed detached from the real world, surrounded by sycophantic hangers-on as he sat at home in Gracelands, practicing karate, reading books and watching television while gorging himself on hamburgers, fried chicken, mashed potatoes and gravy.

Although he was one of the highest paid actors in Hollywood and his films were still big, box office hits, nobody – least of all Colonel Parker – was doing much to encourage him to return to the rock’n’roll music that had made him a star in the first place. While he was busy making movies, exiled in Hollywood instead of touring and recording, there had been a seismic cultural shift.

However far removed from reality he may have become by the beginning of 1968 – with riots in the streets of America, the assassinations of Robert Kennedy and Martin Luther King Jr, and the hippie counter-culture in full flow – Elvis must have been aware that he now seemed out of step with the times. Yet although we don’t really think of him as a political singer, Elvis actually broke down sociological and cultural barriers from the start, which is exactly what the civil rights movement was fighting for.

Born in 1935, Elvis was raised in Tupelo, Mississippi, in the kind of God-fearing, loving but impoverished white family that was a staple of the Deep South. His astonishing run of early Sun singles and his electrifying debut on The Ed Sullivan Show in September 1956 – watched by an incredible 82 per cent of the television audience in America – lit a spark that literally started a rock’n’roll revolution. It’s almost impossible to overstate the explosive effect Elvis Aaron Presley had in the mid-1950s. While his musical predecessors built the foundations for rock’n’roll long before the wider world woke up and paid attention, it was Elvis who broke through to the mainstream and laid out the blueprint, blurring the blues and gospel, the sexual liberation and the controversy. It was Elvis who literally changed the way the world felt, looked and sounded.

Many of the stars that came in his wake would probably never have even stepped onto the stage had it not been for Elvis, who effortlessly personified everything that was cool and rebellious about rock’n’roll. “When I first heard Elvis’ voice, I just knew that I wasn’t going to work for anybody, and nobody was going to be my boss,” Bob Dylan once said, recalling his 14-year-old self, a high-school freshman from Hibbing, Minnesota called Robert Zimmerman. “Hearing him for the first time was like busting out of jail.”

When the Colonel met NBC executive producer, Bob Finkel, in May 1968 to discuss the idea of a television special, he insisted it be a Christmas show.

It wasn’t until director, Steve Binder, and producer, Bones Howe, made it clear that they wanted to jettison the decidedly uncool Christmas concept and do what Binder called “something really important” to re-establish Elvis as a performer, that the singer himself was convinced. “From that first meeting,” Binder says, “I knew he was champing at the bit to prove himself again.”

They came up with the idea of using the set-list to tell Elvis’s life story, starting with Jimmy Reed’s “Guitar Man” and ending with a contemporary hit, but Parker insisted on a Christmas song for the finale. In the end, the show and songs were fine-tuned up to the last minute. Once the terms of the deal were agreed, Elvis went to Hawaii for a break, coming home tanned and trim a few weeks later.

At a press conference a few days before they were due to record the show, Elvis was nervous about returning to the stage but was clearly relishing the challenge. “We figured it was about time,” he said, explaining why he wanted to perform again. “Besides, I figured I’d better do it before I got too old.”

Binder was determined to make the show spectacular and contemporary, so a giant, neon ‘Elvis’ sign was built behind him – an idea borrowed from The Judy Garland Show – and he was dressed in a bespoke, skin-tight, black leather jacket and trousers. “I was awed by the way he looked,” he says. “If he wasn’t famous, you’d still stop and stare. As a director, you’re looking to see which is the good side, the bad side. Elvis was perfect from every angle. It was like a god walking in.”

The show was shot using hand-held cameras – the first time the technique had been used outside sports broadcasting – and also filmed in 360 degrees to really capture his body language and incredible stage presence. Fully aware that Presley was still feeling a little uneasy, Binder made sure that he had nothing to think about apart from performing on stage.

Although the director and his team had meticulously planned every moment of the production, the most memorable section happened almost by accident. After taking him to NBC to show him the set, Elvis asked if it would be possible to have a bed in his dressing room.

“That was the greatest thing that ever happened, because after we finished rehearsing or taping, he’d go into his dressing-room bedroom and jam until 2am and he’d do songs I’d never heard before. I thought, ‘This is gold. I have to get a camera into this dressing room.’”

After Colonel Parker vetoed the idea, mainly to get back at Binder for rejecting his Christmas theme, the director realised that the only way to capture the mood of the dressing-room jam sessions was to recreate them on stage for the cameras.

Accompanied by his original band members, Scotty Moore and drummer, DJ Fontana (who beat his sticks on a guitar case instead of a drum kit), Elvis returned to his roots, singing “Heartbreak Hotel”, “Hound Dog”, “Jailhouse Rock” and all the rock’n’roll hits that made his name.

“It was a lot of fun,” Moore said, “but Elvis was very nervous at the beginning. He hadn’t been in front of a crowd since he came out of the Army. He told us to sit down at the beginning, but after he did the first couple of songs, the crowd started getting good, and he started feeling good, so he stood up.

“After the show, DJ Fontana and I had dinner at Elvis’ house in Hollywood. He said, ‘When we finish the movie, I want to do a tour of Europe. You guys want to go?’ I said, ‘Hell, yeah, I wanna go.’ Of course, Parker put a clamp on that real quick, because he didn’t have a visa for Europe. That’s when he hooked up in Las Vegas. But I didn’t go because they wouldn’t pay us. We didn’t have a falling out, but that was the last time I played for Elvis, and the last time I saw him too.”

Fifty years on, it is still considered the greatest comeback in rock’n’roll history. Elvis was at the peak of his powers, fizzing with energy, looking cooler than ever and the happiest he had been in years. “I almost had to get a hook to pull him off the stage, he was having such a good time,” Binder says proudly. Watched by nearly half of America’s TV audience, it was the most electrifying performance of his career.

Jonathan Wingate is a music journalist for the BBC