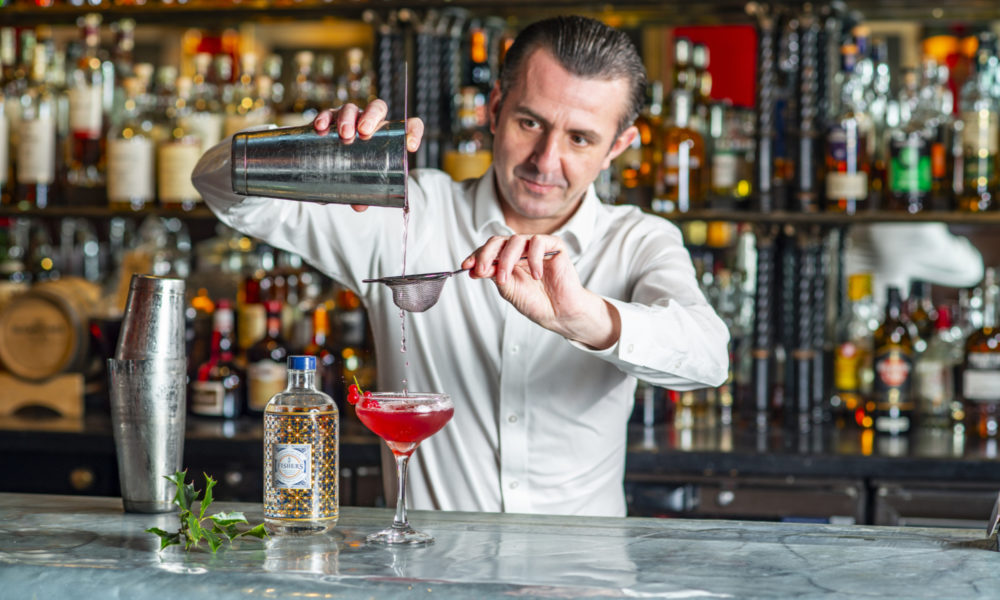 LIFE, ON THE ROCKS

I’m not saying that I drink a lot, but my silver Tiffany cufflinks are, I must admit, a gift from Erik Lorincz, the celebrated barman formerly at the Savoy and now running his own fantastic bar just off Regent Street called Kwant. Erik is both my master and jailer on all matters alcohol related.

The first time I went to the Savoy’s American Bar, the tuxedoed barman with matinée idol looks asked me, “What sort of day have you had?” That was Erik and I think he could tell from my expression that I wasn’t in the mood for banter, immediately adding, “I only ask so that I know what sort of drink to make you. Do you need perking up or bringing down?” Naturally, I was intrigued and my day got substantially better. Years later, I accused him of turning me into an alcoholic. “Yes, but an elegant one,” was his reply. Erik, like the best bartenders, is always ready with a bon mot.

Over the years, I have come to the conclusion that only the classics – Negronis, Dry Martinis, Manhattans, Old Fashioneds, Sazeracs, Daiquiris and Corpse Reviver No2s – deserve my attention and that of my wallet. You can’t improve perfection. I’ve had Martinis with restaurateur Mark Hix and the jewellery designer Stephen Webster, while getting a short back and sides at Nicky Clarke’s Mayfair hair salon. (It was then that I was reminded of George Burns’ dictum: “It only takes one drink to get me drunk… the trouble is I can’t remember if it’s the thirteenth or fourteenth.”) The actor Kelsey Grammer, my drinking companion in Manhattan, LA and London, loves the Savoy’s Gibson – a Dry Martini with white onions. Actor David Soul loves the Margarita at the Chiltern Firehouse, and we’ve solved many of the world’s problems there.

Erik and I have sipped cocktails in trains, planes, and automobiles. There is always a sense of occasion with Erik. Hipster bars are all very well but I have a preference, with the exception of a few gin joints, for the romance and old-world glamour of the great hotel bars: The American Bar, the bars at the Connaught, the Rosewood (where cool meets old school), Claridges, the Chiltern Firehouse, the Blue Bar at the Berkeley and the Donovan Bar at Browns.

But wherever you choose, the important thing is to be at the bar. Always. Stake your claim. There is nothing worse than sitting in a corner, awaiting a drink made by someone you haven’t met. If there are a few of you it is even worse – mixing four or six different cocktails takes time and by the time the tray arrives, the ones that were made first have already lost their sparkle and zest.

No, the key to a great cocktail is the connection between you and the barman. Because while there is never any real need to meet the chef, good cocktails demand that you lock eyes and connect with the person making the drink. The rapport becomes one of the ingredients. And this is why both Erik Lorincz and Salvatore Calabrese of the Donovan Bar are world class. They are not only alchemists; they own the room and hand it back to you.

So there are the hotel bars and there are the rest… And from the “rest” I highly recommend Bar Termini on Old Compton Street. Small, intimate and European, it serves cocktails with purpose and grace and a flourish. The Hideout in Bath deserves a shout too. Here I was introduced to the PickleBack Cocktail, a shot of Bourbon with a shot of pickle water. It’s from the hangover “kill or cure” school. Regulars here have their own bottles locked away. The rest are just “alcohol tourists”, says bartender Callum Rixson.

There is always a cost. Three cocktails in a five-star hotel come to about the same as three weekends-worth of whisky and mixers in a nice country house; but that’s not the point. It’s the feel-good factor. You could buy an entire bottle of gin and one of Vermouth for the price of a Dry Martini from Erik and his ilk; but you are paying for the postcode, the linens, the pressed tuxedos, the lighting, the stage-set costs. It’s all about theatre.

Cocktails and cocktail bars are a great connector. They lead to good conversation and from good conversation come great ideas. And things start to happen. Erik gave me the Tiffany cocktails after I introduced him, over another Dry Martini, to film producer Barbara Broccoli at the American Bar. She was so impressed that she commissioned Erik to create the Skyfall cocktail and serve it at the premiere. Now that’s mixing it.