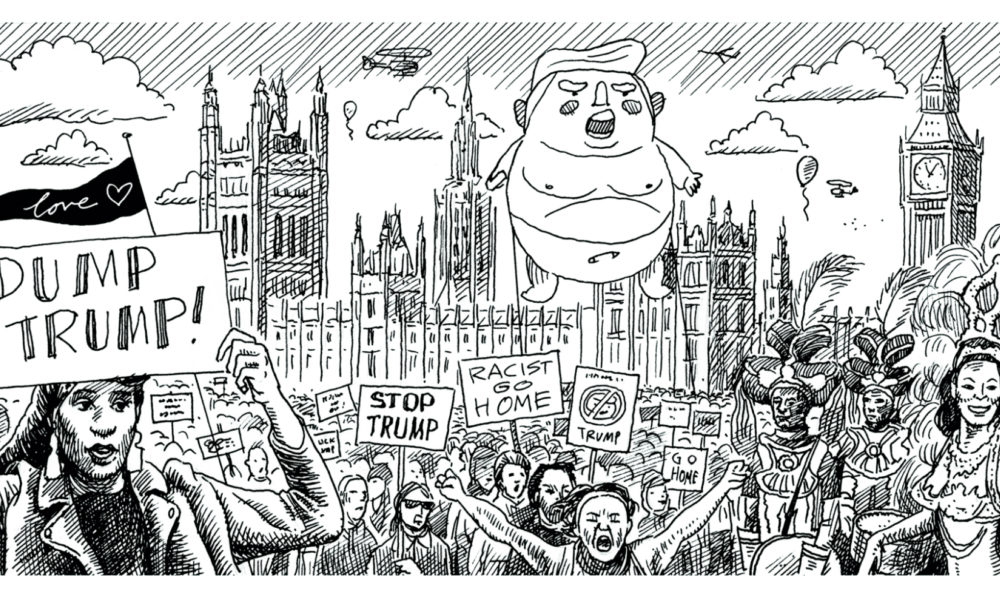 Was 2018 the year that Britain permanently lost its stiff upper lip in favour of hearts on sleeves? Rob Crossan investigates

Whatever happened to the Donald Trump baby balloon? As the Orange-Haired One studiously avoided the protests that closed the streets of Central London during his visit to the UK in July, the balloon was a strangely soothing sight: calmly floating across the cerulean skies on one of those endless, lethally hot days that defined the summer of 2018.

In between mopping my brow with a page torn from the Evening Standard magazine and guiltily draining plastic bottles of water into my mouth, I couldn’t help but notice that something else, not quite so orange but certainly as overwhelming, also seemed to be soaring away into the ether, vanishing from view for good.

Taciturn, unruffled, demure and occasionally stentorian (but only if there’s a war on): these are the characteristics that have defined Britain to outsiders and, often, to ourselves, over the centuries.

Yet the legacy of 2018 will be one of a time when that emotional firewall, which first began to crumble with the eruption of emotion following the death of Diana, Princess of Wales, 21 years ago, finally collapsed for good; swept away by multiple tidal surges of overt anger, grief, tears, and passion which, seemingly, we now have no desire whatsoever to manage or control.

The World Cup and the reaction to the national team’s slightly above-average performance amply demonstrated the ease to which England fans have taken to a new emotional default state. Namely, a kind of sentimental mourning that, until recently, was most readily associated with the tear-streaked faces of Latin American football fans after Argentina or Brazil blow their chances of glory.

Now that the songs of Oasis have shifted from the first dance at a provincial wedding to the soundtrack of our national despair, the collective show of unbridled grief outside pubs and bars upon England’s defeat to Croatia contrasted astonishingly with my memories of England’s last semi-final World Cup exit in 1990.

Then, aged 11 yet allowed in the bar of a family campsite, my clear memory is of an atmosphere of collective, fleeting anger followed by a return to normality within an hour of Chris Waddle blazing his penalty over the bar.

On that vast pitch in Turin, Gazza may have shed a tear. But back on the campsite there was no extended period of mourning nor any real communal outburst of pride. There was just a general air of dissatisfaction and annoyance with proceedings.

In those dog days of the final Thatcher cabinet, displays of anger seemed to define the national mood. The Poll Tax protests, the Strangeways Prison riot: both conveyed a rage that somehow couldn’t express itself beyond the initial stages of violent vexation.

Fast-forward 28 years and we’ve learnt a thing or two, mainly from the US and South America in terms of releasing a more florid type of emotion and unblocking our emotional constipation.

Colourful, funny, passionate and inclusive: the anti-Trump protests that took place during his UK visit were like a colossal music festival with a headliner that nobody likes.

Compare this with YouTube footage of 1990’s Poll Tax riots in Trafalgar Square. The only colour comes from the odd Socialist Worker placard and the occasional unfortunate shell suit. All is grey. All is rage. There’s not a juggler, rainbow flag or balloon to be seen.

Hardly halcyon days, but perhaps we should be thinking about the consequences of the permanent hole that’s now been burnt into the British barricade of emotional repression.

Clearly there were elements of our national psyche that simply had to go. The changes we’ve gone through in terms of the recognition we give mental health and gender and diversity choices would be inconceivable to anyone who was at that Trafalgar Square protest over a quarter of a century ago.

But, concomitant to that is a new danger. Yes, we’ve learnt how to get in touch with ourselves in a way that Bobby Robson and Cecil Parkinson could never countenance, but now that the psychological fire hydrant has been turned on full blast, we now have no means of staunching the gush of slippery, slightly oily, melodrama.

We can choose to blame it on Love Island, on GIFs, on a media that demands that symptoms of trauma and upset be publicly displayed in order for dubious sympathy to be deployed.

Wherever you place culpability, the reality is that we currently live in a society in which most teenagers are still, just about, able to differentiate between the emotional distress of a person who is being bullied in the playground and the crocodile tears of a reality show contestant who’s been told that he can’t do a very good impersonation of Bruno Mars.

But for how much longer?

Will future generations be able to distinguish between the stage-y and the sincere if we decide that open displays of grief are an appropriate response to everything from the end of season seven of Game of Thrones to accidentally deleting our Facebook archive?

At the end of the year, with Trump making no plans to return to Blighty, the England team plodding through the motions, and Brexit closing in, perhaps we should take a moment to remember that there are advantages to being stoic at the right moments, too.

At long last we’ve learnt how to let our renowned, stiff upper lip wobble. Now we have to learn how, and when, to make it stop.

Rob Crossan is a journalist, author and radio presenter specialising in travel and men’s lifestyle features