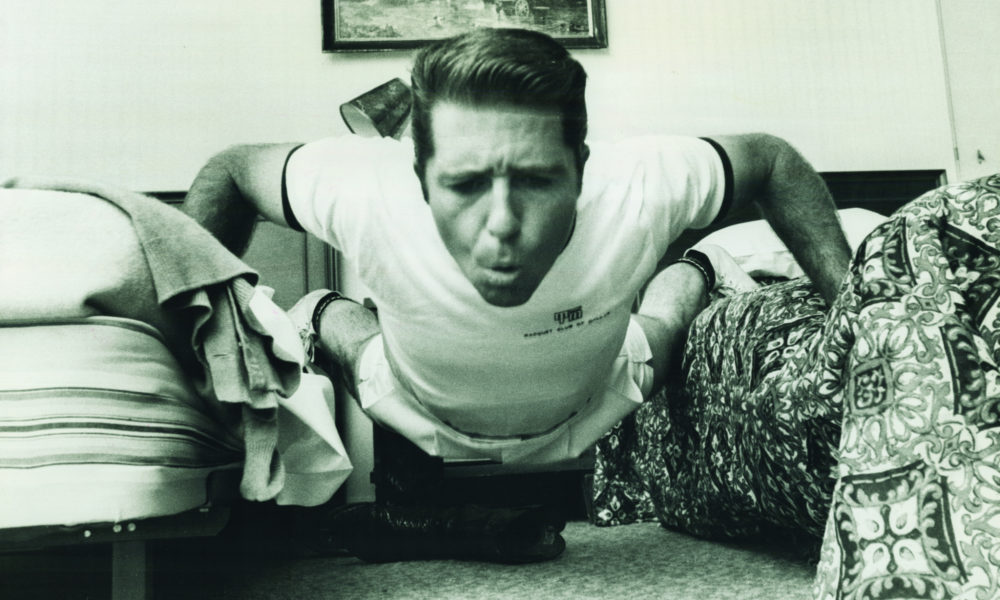 Gary Player looks up briefly from the sports section of his newspaper. “I just want to see what they have to say about this Kyrgios fellow,” he says, referring to the mercurial Australian tennis star Nick, who’s upset the tennis establishment again. “Here’s a headline. He says, ‘Tennis needs more bad boys.’” Player shakes his head and tuts disapprovingly. “He shouts, he spits, he swears… It frustrates me. It’s character we need. There’s no question if he had Nadal’s head, or Federer’s, he’d be the best in the world. He’s so talented. But he’s nuts.”

Player, one of the greatest golfers of all time, has never been afraid to speak his mind. Now 84, the fires still burn. The South African was always a fighter, not just on the greens where he took the game to the mid century poster boys of American golf – including Jack Nicklaus, Arnold Palmer et al – but in life, in politics, in philanthropy, in whatever he was doing. Nothing appears to have changed.

We’re having lunch at Surrey’s leafy Wentworth Golf Club on a steamy summer’s day and the plan is to talk about his first major win, 60 years ago. At just 23, he rocked up at Muirfield and won his first Open, coming from four strokes back to win by two. But it’s going to be a while before that comes up in conversation. Instead, he wants to talk about Donald Trump.

“I’m a big Donald Trump fan,” he says, inspired, I can only assume, by talk of high-profile bad boys. “I’m not going by his character; I’m going by what he did for the country.” He reels off tax cuts, meeting the Korean dictator Kim Jong-un, and cutting immigration as symbols of Trump’s achievements. “And he’s done more for black people than any president in the history of America,” he adds.

We’ve only been talking for five minutes, and while golf hasn’t come up, we’re already on race and the most controversial American president in living memory. That latter comment won’t sit easily with many. But coming from Player, it warrants hearing.

While he was racking up 167 tournament wins around the world, the diminutive golfer was also an activist – long before the term was claimed by progressives on the Left – routinely speaking out against apartheid in his native South Africa, befriending Nelson Mandela (one of his heroes), sponsoring black athletes, and even wearing black and white trousers at the 1960 Open Championship – using golf for political ends in a way the game would still be very uncomfortable with now.

He says he’s also played golf with every US president since Reagan and that he was never afraid to tee it up with South African prime ministers who advocated apartheid. “I was criticised for playing golf with him,” he says of former South African prime minister Balthazar Vorster. “But if President Xi, a communist, asked me to play, I would play. I’d play with him out of respect for what he is.”

He compares Trump to another of his heroes, Winston Churchill. “He was arrogant, he didn’t care what he said, he got the job done,” he says. “All the Democrats have hammered Trump. If Kim Jong-un had met Obama, they would have said it was the greatest diplomatic move ever made. Trump doesn’t come across as a diplomat, but he’s getting the job done.”

He’s played golf with Trump, who he describes as the “best presidential golfer by a mile”, and has no regrets. He’s not worked on one of Trump’s golf courses, but says he’d love to, adding, “He doesn’t know the intricacies of golf design, but because of his ego, he thinks he does.”Then, as quickly as we got on to golf we’re off it again.

While he was racking up tournament wins, he was also an activist, speaking out against apartheid and befriending Mandela

Conversation moves to Zimbabwe (“It was the food basket of Africa,” he laments); to the recent spate of murders in the South African farming community that last year made him decide to sell the stud farm he’d owned and lived on since 1974 (“A very sad time in my life”); and to socialism. He pulls a Zimbabwean $100 billion note out of his pocket and holds it up. He remembers having to order lunch before a round of golf in Zimbabwe because the inflation rate meant that by the time you’d played 18 holes you’d find the price of your burger and chips had doubled.

“They did a poll of young people recently, and apparently four out of 10 were quite happy with socialism,” he says solemnly, still holding the worthless bill. “So when I meet people and they bring up socialism, it’s interesting to show them something like this. Because they’re oblivious to the facts of what happens around the world. But I’ve got to be very careful what I say…”

In which case, let’s move on and talk about golf, I suggest. And about Gary Player.

He was born in Johannesburg in 1935 to Harry, a gold miner, and Muriel Player, the youngest of their three children. His mother died when he was eight years old, and he was, by his own estimation, poor. Aged 14, he took up golf, and is said to have parred the first three holes he played. He turned pro at 17.

Six years later, he won his first major (for a £1,000 prize), going on to win eight more, the last of them the 1978 Masters, where he shot a final-day 64 to overturn a seven-stroke deficit. His major tally of nine puts him equal fourth on the all-time list, level with Ben Hogan, and behind Walter Hagen, Tiger Woods and Nicklaus, still on top with 18. Palmer, the charismatic American against whom Player had some of his most titanic battles, has seven. He then doubled his own major haul on the Seniors Tour, becoming the only golfer in history to win the career Grand Slam (winning all four of golf’s majors) on both the regular tour and as a senior.

Bar Jersey’s turn-of-the-century star Harry Vardon, Player is the only golfer from outside the USA in the all-time top 10 major-winning golfers. When he won in America, he won in Arnold Palmer’s back yard; in Jack Nicklaus’s back yard. And he won when international air travel was still in its infancy. “I had to fly 40 hours in a plane with no jets and play against these guys in their own country,” he says. “Every time Nicklaus or Palmer came to South Africa, I murdered them!”

Player may have been smaller than Arnie and Jack – he peaked at 5’ 7” – but what he lacked in stature he made up for in discipline and determination. He became fascinated with sports science early and hit the gym long before being musclebound – like Woods or current world number one Brooks Koepka – was considered good for your game. One of his nicknames was ‘Mr Fitness’.

“In 1965, when I won the US Open to beat Nicklaus to win the Grand Slam, the night before I was squatting 325lbs on my back,” he recalls. “Trent Jones, the [golf course] architect, walked by and said, ‘Gary Player will never win another tournament. You can’t do weights and play golf.’” Apparently, the comment still irks.

He’s famous for having said, “The harder I work, the luckier I get,” but almost blushes when we remember his own sayings, preferring to bring up Churchill. He goes back to his wallet and picks out a piece of paper and quotes: “The heights of great men reached and kept were not attained by sudden flight, but they, while their companions slept, were toiling upwards in the night.”

You get the impression he’d have this for his epitaph. “That’s what I did,” he says, jutting his head forward in that memorable way of his. “I hit balls. When I got back to the hotel at 11 o’clock at night and asked the hotel manager if I could use the gym and he said, ‘No it’s locked,’ I said, ‘ Please, give me the key and I promise I’ll lock it and give it back.’ And I did that kind of thing throughout my life.”

“It’s ten percent what’s happening to you, and 90 percent how you react to it. You’ve just got to be grateful for the opportunity”

He’s been in Greece and hasn’t played golf in two weeks (“That’s like a year for you”) or been to the gym, because there wasn’t one where he was staying. After lunch, he wants to get out on the course and then pump some iron. “Well, I don’t want to go to the gym,” he says, stifling a smile. “It’s tough to go and lift those weights and get on the treadmill. But I’ve kept it going, I’ve put energy in the bank. Look at other guys my age – they can’t walk!”

As if to emphasise the point, he jumps up and kicks his foot to above his head-height. It’s alarming to see an 84-year old man demonstrating such athleticism. I’d rather not be the guy that broke Gary Player. “Of course, you’ve got to be blessed,” he goes on, sitting back down. “But I eat properly. I haven’t had bacon or an ice cream in 22 years. I’ve never had a glass of milk to drink. And I’m a fruitaholic.”

And then he’s back on Kyrgios and today’s athletes again. “People say, ‘I’m so unlucky,’” he offers, reflecting on how some handle defeats and setbacks. “But it’s ten per cent what’s happening to you and 90 percent how you react to it. You’ve got to be grateful for the opportunity and to take advantage of it.”

And with that, he heads off to play golf. There’s just no stopping him.

Robin Swithinbank is a freelance journalist and editor, writing for publications including the New York Times, the Financial Times and the Daily Telegraph