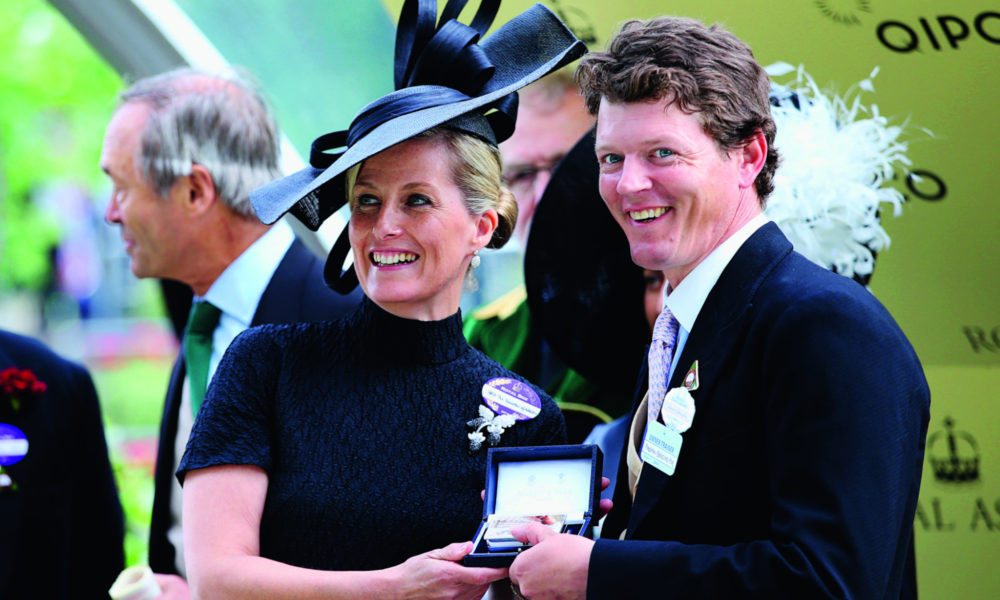 THE MASTER OF KINGSCLERE

Presiding over the historic Park House stables, trainer Andrew Balding – racing royalty in his own right – is aiming for Antipodean glory at November’s Melbourne Cup, he tells Colin Cameron

Andrew Balding is today the undoubted master of Kingsclere’s Park House stables. There are other candidates: his sister, Clare, enjoys national treasure status, and his father, Ian, trained Mill Reef, the distinguished Epsom Derby winner, in the same 150-year-old racing yard. As a noted breeder of champion racehorses, his mother Emma might also have claims. Yet the youngest of the Baldings, a winner of one of English racing’s five classics like his father, now prevails over all that he sees every morning: namely 200 expertly primed thoroughbred racehorses.

Owners include racing royalty (literally, in the cases of HRH Queen Elizabeth, and Qatar’s Prince Fahad Al-Thani) and distinguished newcomers such as Vichai Srivaddhanaprabha, of the King Power duty-free empire, who also boasts Leicester City FC and interests in polo as part of his sporting portfolio. Amid rulers and masters of their own universe, Balding is fully commanding of many prime Berkshire acres featuring gallops, barns and yards named after the likes of Ormonde and Lochsong, among the many champions stabled here since the 1860s, when Park House was first home to a trainer.

Balding is equally at the helm seated comfortably at Boisdale of Belgravia, opting for the linguine. On his own menu this autumn is the prospect of extending his reach to the southern hemisphere. A brace of Kingsclere inmates, the four-year-old colt Count Octave, and Duretto, a gelding two years’ senior, could feature, respectively, in Australia’s Melbourne Cup and Caulfield Cup.

No British trainer has managed the feat of bringing home the former, a trophy that Antipodean horsemen and women covet above all others. “Quarantine is the first hurdle,” Balding explains. “First it’s two weeks in the UK isolated at a stud in Newmarket. At least access there is relatively straightforward, and you can use the gallops after the town’s many stables have finished for the day. Then, on arrival in Australia, once you have negotiated the flight, which will usually involve a stopover, it’s more complicated; a turnstile rather than gate, then showers and a change of clothes after visiting.” He gives a knowing smile, acknowledging the odds stacked against him. “Equine flu is the big worry there.”

Breaking new ground is additionally hard when you are part of history. The Kingsclere estate, where Balding exercises his string, has an abundance of landmarks referencing this past – the Flying Fox yard, a statue of Mill Reef, acknowledgements to John Porter, the legendary trainer of the Victorian era.

“It can be a bit like living and working in a museum,” says Balding. “But at the same time, I love the history and have a reverence for the past. Being at Kingsclere is a privilege.”

Balding shares some issues with his forebears: moles under the gallops date back to the very beginnings. Where he is leaving his own mark is in modernising the site. Thanks to him, Kingsclere today boasts American-style barns – one end open, which allows the air to circulate without generating a draft, with the added advantage of natural light. “We also have treadmills,” Balding adds. “Horses can go full-pelt.”

His own tempo is perhaps more measured now. “When I started training, taking over from Dad in 2003, I was ready to conquer the world. That first season I saddled Casual Look, who won the Oaks, at Epsom, giving me a Classic winner. But at the end of the year, I had a £200,000 overdraft and few orders to buy yearlings for the following season. I went to Saratoga and bought a colt for $130,000.

When I got home, my parents asked what exactly the plan was. I replied, run the horse and increase its value before selling at a profit. Simple! We managed it. Just. But the process wasn’t quite what I’d expected. After that, Mum became my handbrake: the voice of reason.”

Whatever may have changed in his 15 years as a trainer, Balding says the main challenge remains the same: simply the daily task of ensuring the horses are fit to race for their lives. Then there’s the challenge of installing a winning mentality. “Training racehorses is like being headmaster at a smart prep school,” he says. “Your staff are the teachers, the owners are the parents. The only difference is the holidays are shorter!”

Balding is overlooking that schools are also filled with applicants. A major part of his job is, in fact, persuading owners like Casual Look’s patron, Will Farish, formerly America’s ambassador to Britain, to entrust him with bloodstock homebreds valued at six or seven figures. He also scours auctions in Britain, Ireland, France and America, and favours going beyond the most established markets. “The Baden-Baden sale in Germany is great,” he says.

One product of Balding’s success at recruitment is Fox Premier (the owner is Srivaddhanaprabha). “Fox Premier is a two-year-old machine on the gallops at home; he just has to show that on the racecourse,” says Balding. “Of my older horses, Beat The Bank has the ability to win a Group One race.”

Prize money from that would improve his position in the trainers’ championship – on the day we lunch, Balding stands 10th. “I check the Racing Post league table every day,” he admits.

No need to confirm who’s number one at Kingsclere, though.