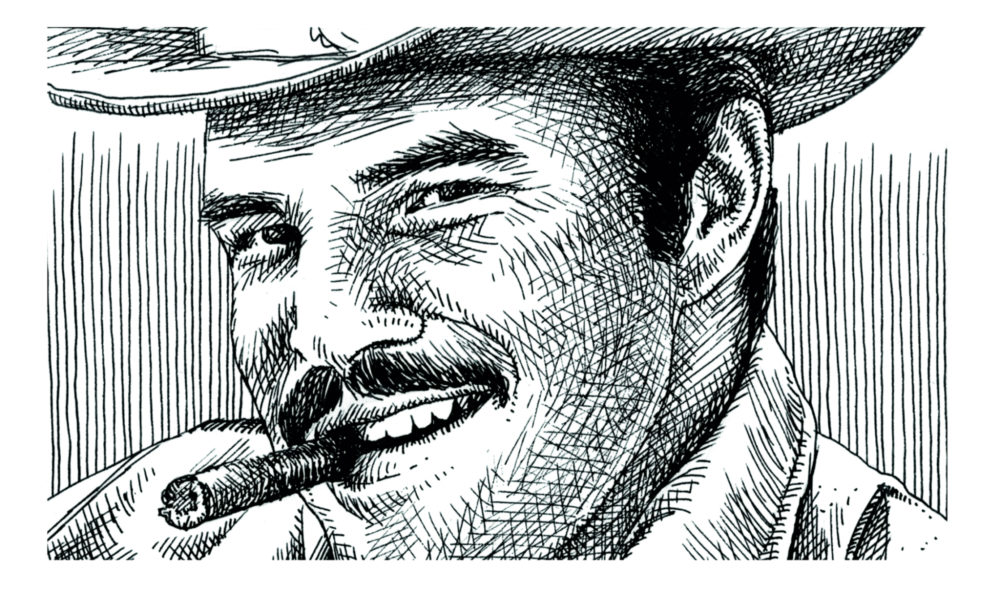 When Burt Reynolds died at age 82 in September 2018, it felt like the end of an era; of a Hollywood before the internet, before Instagram, and #metoo, and sanitised, publicist trained identikit actors. There was plenty wrong with that world, but it was infinitely more glamorous than the waxed eight-packs, Goop diets, and beauty-vlogging that we have today, and it created film stars the likes of whom we may never see again.

With his rakish moustache and his wisecracking, unashamed machismo, Reynolds was one of them. I met him once, very briefly, at the Boisdale Cigar Smoker of the Year awards in 2015. Actually, ‘met’ may be too strong a word. I nodded at and was nodded to, but it left a deep impression. By then his health was failing – he had a heart bypass in 2010 and had to be helped around by a couple of winsome aides. But in a white tuxedo, black shirt and black bow tie he looked every inch the icon. The twinkle in his eyes was unmistakable. Here was a man who had lived, and loved it.

As with many of Hollywood’s most beloved figures, Reynolds’ thespian talent was obscured by Burt Reynolds the star. Handsome, rugged, and pugilistic, he sold a specific kind of beefcake swagger; a downtown Brando without pretensions. He never threatened to inflict his Lear upon us, for he knew that much of his appeal was physical. He had been a college football star and always looked like he could handle himself in a fight, despite his compact stature. In fact, before his career took off he had various tough-guy jobs, on the docks or on nightclub doors.

After appearing in cheap Westerns, he broke through with Deliverance in 1972, a film about four yuppies whose canoeing trip into Hicksville, Georgia goes awry. Apparently the stunt coordinator complained that a doll being used in a canoe instead of Reynolds looked like “a dummy”. The big man stepped in to film the stunt and afterwards, nursing a broken coccyx and coughing up water, Reynolds asked the director, John Boorman, how the scene looked. “Like a dummy in a canoe,” came the reply. Still, the film catapulted him into the top tier of Hollywood sex symbols. This was also the last time we saw him balding – from then on, Burt was totally toupée.

Smokey and the Bandit came in 1977, grossing $300 million at the box office, second only to Star Wars that year. A sequel followed, and The Cannonball Run. He could do no wrong at this time, and was voted the most popular star in America five years in a row. “I don’t have any pretensions about wanting to be Hamlet,” he said. “I would just like to be the best Burt Reynolds around.”

In later years Reynolds would reminisce about the roles he had rejected: Jack Nicholson’s part in One Flew Over the Cuckoo’s Nest, Richard Gere’s Pretty Woman gig, James Bond. Fun as his Bond would have been, imagining how Reynolds might have played these characters is to miss the point of the man. It was always about so much more than what he said on screen. It was about the swagger and the anecdotes, including turning down Greta Garbo and giving Fred Astaire a lift home.

He also came to regret the iconic 1972 Cosmopolitan shoot in which he appeared naked, smoking, on a bearskin rug. Back then it was radical for a male star to let himself be objectified, as women were. It was this side of him that everyone warmed to, the modest wiseguy who described his movies as the kinds shown in prison or on planes where “the people can’t get out”.

“I realised that people liked me, that I was enough,” he said. “So if I could transfer that character – the irreverent, self-deprecating side of me, my favourite side – onto the screen, I could have a big career.”

He was a good actor, but he was a magnificent Burt Reynolds.