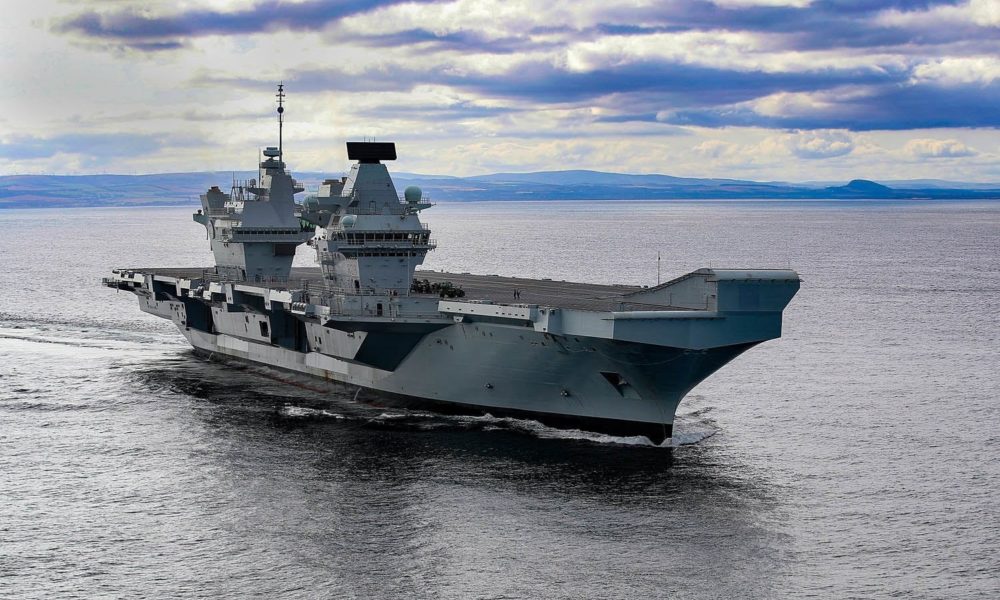 When it comes to defending the realm, cyber attacks can never match the sheer colossus that is a 21st-century Navy warship, writes Con Coughlin

On a blustery morning in the North Sea in 2010, I watched the last Harrier Jump Jet take off from HMS Ark Royal, the Royal Navy’s flagship, before it set sail on its final voyage to the scrapyard. As the ship bore headlong into a 45-knot wind laced with freezing sleet, the mood was dark: Britain was losing a vital pillar of defence.

Ark Royal’s final voyage was in stark contrast to the jubilant scenes that accompanied her launch by the Queen Mother on the River Tyne back in 1981. For that occasion, massive crowds lined the river banks to celebrate the ship’s arrival, cheering loudly as she began her maiden voyage in defence of the realm.

The Swan Hunter shipyard that built Ark Royal closed in 2007, and as she prepared to slip her moorings for the last time at North Shields, the only sound was Rod Stewart’s “Sailing”.

En route to her final destination in Portsmouth, we witnessed the awe-inspiring departure of the last Harrier from the Ark Royal’s squadron. Having taxied onto the flight deck into flurries of snow, the pilot applied full throttle to the aircraft’s Pegasus engines, causing a sheet of sea spray to batter the deck. The plane then hurtled along the carrier’s alarmingly short, 400-foot runway, and within seconds was soaring into the sky. The whole ship reverberated with the roar of its engines. There were a few muffled cheers and waves from the frozen onlookers before it disappeared into the leaden skies, bringing to an end one of Britain’s most inspirational aircraft.

Having made its name during the Falklands campaign, the Harrier saw action in both Gulf Wars as well as flying close combat missions in Bosnia, Kosovo and Sierra Leone. Its ability to provide close air support to ground troops made it especially popular with the Army and Royal Marines in Iraq and Afghanistan.

The decision by David Cameron in 2010 to scrap the Navy’s fleet of Invincible-class aircraft carriers, together with the Harrier Jets that made them a formidable fighting machine, was, as I wrote at the time, the most calamitous in modern military history.

It meant that, for more than a decade, Britain would be unable to deploy ‘carrier strike’ – the military term for using aircraft carriers – thereby significantly reducing our ability to defend our interests around the globe.

You only need look at Britain’s involvement in the recent conflicts in Libya (2011) and Syria (2011 to the present day) to see how badly our military chiefs have missed the fearsome firepower of a Royal Navy aircraft carrier. During the 2011 campaign to overthrow Colonel Gaddafi, Britain was reduced to improvising a carrier by flying Apache gunship helicopters off the deck of a support ship – an immensely risky undertaking, as helicopters cannot fly high enough to evade anti-aircraft missiles. Thankfully, in the Libyan conflict, most of the missile systems had been put out of action before the Apaches were deployed.

Britain has been at a similar disadvantage in Syria, where the Americans, French and Russians have made good use of their aircraft carriers to pursue their military goals. Britain, by contrast, has been confined to flying sorties out of Cyprus, or firing missiles from the Navy’s attack submarines in the Mediterranean.

Fortunately, this glaring gap in the fighting capabilities of our Armed Forces is about to be rectified with the Navy’s new Queen Elizabeth-class aircraft carriers, the first of which is due to enter service early in the 2020s.

At 65,000-tonnes, the new ships are nearly three times the size of their Invincible-class predecessors, which were a modest 22,000 tonnes. The first of the ships, the Queen Elizabeth, has already received rave reviews after the Queen attended her official commissioning ceremony at Portsmouth at the end of last year.

More recently she was the star attraction in New York, when she took a brief break from sea trials in the Atlantic to host a UK-US trade event. Construction of the second carrier, the Prince of Wales, is nearing completion.

But while the Navy’s new flagship has its admirers, a degree of controversy still surrounds the Government’s decision to invest the Ministry of Defence’s meagre budget in aircraft carriers. Critics claim they are too big, too costly, and of little relevance to modern warfare. Why spend money on aircraft carriers, they ask, when you can easily inflict more damage on an adversary by a well-executed cyber attack? My reply is that, if aircraft carriers are antiquated relics of a bygone military age, then why are emerging powers, such as India and China, trying so hard to develop ones of their own?

As for the cost, that is a matter the Government must consider during its review of future defence spending next year. Yes, the new carriers are the largest and most expensive ships ever built for the Navy, and have been a drain on the defence budget. But now we have them, it makes sense to use them properly, and equip them with the new F-35B stealth jets that have replaced the iconic Harriers. Otherwise, I fear our gleaming new carriers will become nothing more than floating white elephants.