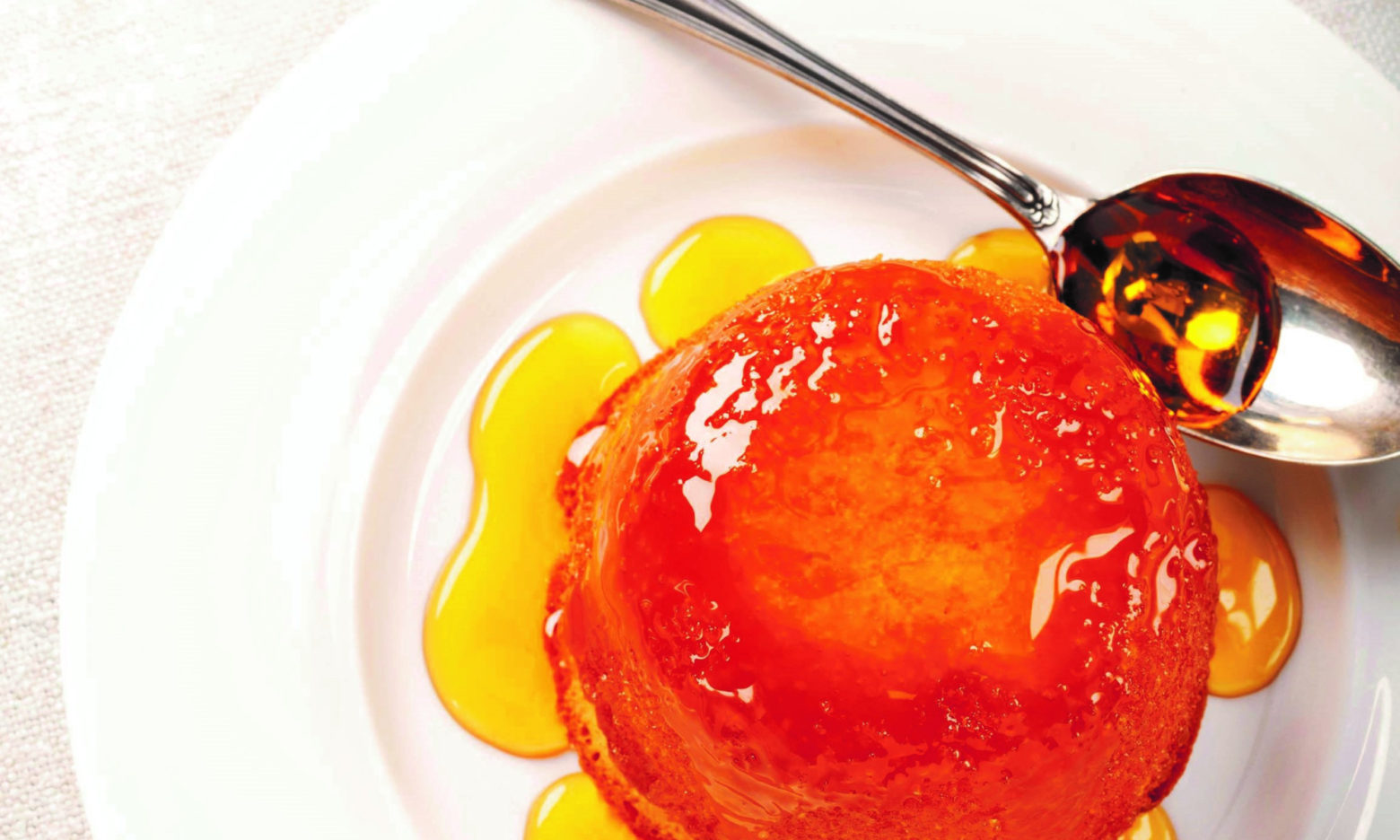 In praise of stodge, podge and custard

Forget the delicate morsel. For Bill Knott, when it comes to dessert, only a proper full-fat, treacly sweet, and winter-warming English pudding can satisfy

I was in a new Nordic restaurant the other day, sampling the tasting menu. As the earnest sommelier explained why he had chosen a thimbleful of cloudy orange wine to accompany my 17th canapé (sorry, “course”), it arrived. “Spruce shoots, rye crumbs, pickled blueberries, rosemary granita,” read the menu. Since it was the last item on a lengthy list, this, apparently, was pudding.

Well, I’m as big a fan of the Scandinavian kitchen as the next tattooed hipster, but this was not pudding. Treacle sponge, jam roly-poly, spotted dick: Puddings should not be foraged, they should be steamed and served with custard. The steamed pudding is one of the few exclusively British inventions in our national cuisine, with a long and glorious history.

In the Middle Ages, puddings were a mixture of meat, blood, fat, offal, and grain, packed in the intestines or stomach lining of a recently-slaughtered animal, then baked or boiled. Examples that survive today include black pudding, white pudding, hog’s pudding and the mighty haggis.

In the early 17th century, however, cooks began to use pudding cloths. By wrapping a pudding in a square of linen, perhaps from an old bed sheet, and gathering the corners to encase the filling, a pudding could be boiled without the need for intestines. Importantly, since animals were usually slaughtered seasonally, this also meant that puddings could be made throughout the year. With the steady fall in sugar prices and the widespread availability of dried fruits, puddings became more popular, and sweeter. Cookery in the Middle Ages rarely distinguished between sweet and savoury (many popular dishes were both) but, by the 17th century, clearer distinctions in the structure of a meal had emerged. Take mincemeat, for example.

Medieval recipes for mince pies commonly call for minced mutton or beef, to which dried fruits – prunes, dates, raisins – were added, as well as vinegar, beef suet, and spices such as saffron, cloves, nutmeg, mace, and cinnamon. The filling was wrapped in pastry, baked, and served as a main dish. Gradually, the proportion of meat to fruit changed. By the mid-19th century, recipes for mincemeat favoured fruit, sugar, and alcohol. Eliza Acton’s recipe in Modern Cookery for Private Families (1845) contains 1lb of ox tongue, 2lbs of suet, 5lbs of fruit, 2½ lbs of “fine Lisbon sugar”, and – for good measure – a pint each of brandy and madeira.

The Victorian and Edwardian eras saw the “nursery pudding” reach its zenith. Generations were weaned on vast slabs of suet, sugar, dried fruit, and jam, with lashings of custard. By the 20th century, pudding basins became more common than pudding cloths, while Heinz and other big food manufacturers had started putting puddings in tins.

Now, sadly, the classic pudding is in possibly terminal decline. We have suffered all manner of faddish diets over the last 50 years, which haven’t helped; diets that demonise sugar, fat or carbohydrates, which are the ingredients for a steamed pudding. Chefs must bear some blame. In their ceaseless attempts to create beautiful plates of food, egged on by winsome Instagrams of pretty plates and popular cookery shows, the humble suet pudding rarely enters their mind.

Admittedly, spotted dick, treacle sponge, and their ilk are not hugely photogenic, but that is not the point: Pudding should be eaten with gusto, not photographed and admired.

At home, meanwhile, enfeebled by central heating, we have slipped into Continental habits, like eating yoghurt for dessert. Proper puddings, we are told, are frivolous and unnecessary, and a sweet tooth is unsophisticated.

But we are in denial. Set a proper pudding before a Brit, and we exhibit Proustian emotion, regressing to the security of the nursery or school dining hall. Scale up Proust’s rather effete little madeleine about 50 times, replace the limeflower tea with a steaming jug of custard, and you will see what I mean.

As we enter the brave new world of Brexit, perhaps it is time to recover some of the happier highlights of our heritage. The Empire wasn’t built on Müller Corners. It is time to indulge in nostalgia. So, turn off the heating, pull on a sweater, chuck out the diet books, and roll up your sleeves. Spoon some golden syrup into a pudding bowl, whisk together flour, eggs, butter, sugar, and treacle, pile it over the syrup, cover with greaseproof paper and foil, then steam it for two or three hours. Invite a few friends over (best tell them to wrap up warmly) and bung some Elgar on the gramophone. Precede the pudding with a token main course – a roast rib of beef, say, with mounds of Yorkshire pudding – before upending the pudding basin and serving magnificent wedges of treacle sponge. As guests dreamily pour the custard, I guarantee that tears of gratitude will stream down their faces. You don’t get that reaction from rye crumbs and rosemary granita.