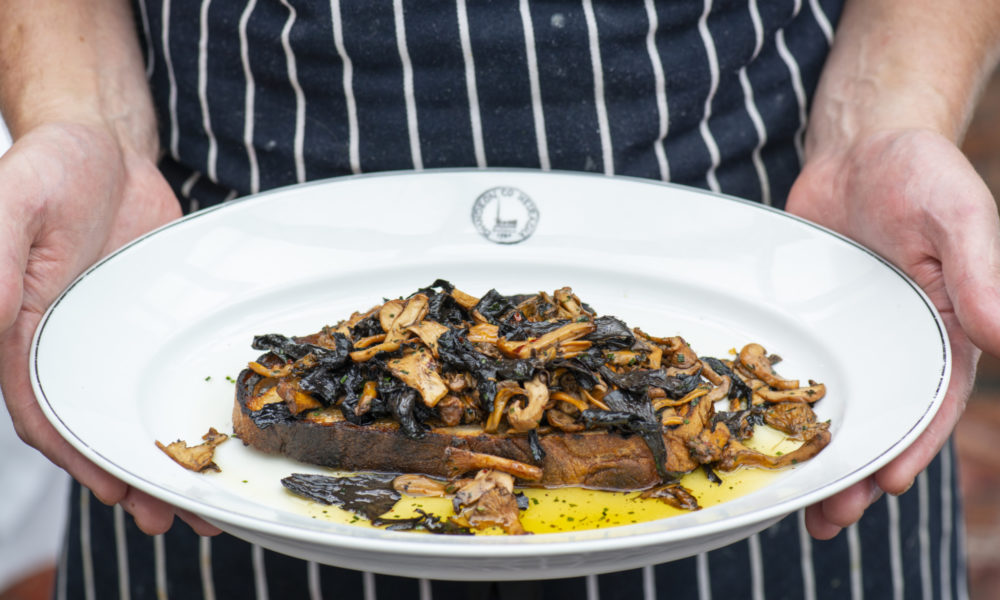 This season wild mushrooms are taking centre stage on Boisdale menus, with rarely-seen examples foraged fresh every day. Bill Knott sings the praises of the magnificent fungi with names as exotic as their looks

For the gourmet, there are many consolations to the end of summer. Game, of course, both furred and feathered; apples, for cider or a buttery tarte Tatin; pears, for poaching in sweet white wine, or just for eating with a hunk of hard cheese (Berkswell is especially good). Chestnuts and cobnuts, toasted over the fire, and medlars, the strange fruit that needs to be left to split and rot until soft and brown. Shakespeare called the medlar “open-arse”: with its gentle whiff of decay, it's one of the great, forgotten flavours of autumn.

But it is the magical plethora of mushrooms springing up that truly set the gastronome’s pulse racing. Giant puffballs, wood blewits, beefsteak fungus, chicken of the woods, trompettes de la mort: for a nation that's almost mycophobic in its distrust of mushrooms and thinks anything you can’t buy in Sainsbury’s is a toadstool, we've come up with some thoroughly evocative names for them. All it takes is for sun, rain, soil and temperature to conspire, and the mycelium (a kind of subterranean cobweb) will start to fruit, pushing its colourful fungi through the soil and into the warm autumn light.

My first experience of wild mushrooms, however, was not amongst a forest’s fallen beech trees and mossy undergrowth, but in the thoroughly urban setting of Lina Stores, the Italian delicatessen on Brewer Street, in Soho. As a young chef in the late 1980s, I marvelled at the basket of porcini (boletus edulis, otherwise known as cèpes, or penny buns) that arrived every crisp, sunny autumn morning.

They had been foraged by Giovanni (Lina Stores’ paterfamilias, invariably dressed in a three-piece tweed suit and sturdy brown boots), who would proudly show off his trug of porcini, with their bulging stems, smooth caps and spongy, olive-green spores. He had several favourite hunting grounds near his north London home, but nobody – not even his wife – knew where they were. Sliced and fried gently in olive oil and butter, with just a scraping of garlic and a twist of salt and pepper, until fragrant and slippery, they were a joy.

A few years later, mushroom expert Roger Phillips (his book Mushrooms is still the essential companion for would-be foragers) took me on a foray around the New Forest. Roger’s first experience of collecting mushrooms was on his grandparents’ farm at the end of the war.

“One week, the countryside was covered in field mushrooms: we picked 70lbs in one day. My grandmother warned me against even touching any other mushrooms, though: ‘they’re all poisonous’, she insisted.”

Our New Forest foray failed to yield any porcini, but we did find livid red beefsteak fungus, crinkly cauliflower fungus, oyster mushrooms, and a clutch of the purple, jelly-like amethyst deceiver.

Roger gave me a copy of his book but – apart from a magnificent, unmistakable giant puffball in a Gloucestershire field – I have been too timid to go on a foray without an expert in tow. The markets of southern Europe have been happier hunting grounds: morels, for example, whose honeycombed caps need careful cleaning, but are fabulous cooked in butter and served with rabbit or chicken and a white wine sauce. And pieds de moutons, with their shaggy spores: perfect when quickly fried with a few cubes of smoked bacon and a minced shallot, then folded into an omelette with a little chopped parsley.

And, while the UK’s markets are often bereft of anything fascinating on the fungus front, restaurants – not least Boisdale – are taking an interest. Pieds de mouton – “hedgehogs”, in English – will be on many modish menus, as will autumn chanterelles and the glorious penny buns. In recent years, foragers’ distribution networks have spread as quickly as a rampant mycelium, so chefs all over the country can now get their hands on wild mushrooms.

Increasingly, they know exactly what to do with them, too; invariably, this means a) make sure they’re not poisonous, b) chop them into bite-size chunks, and c) season and fry them over a medium heat in butter and/or oil (see left).

It was not always thus. Back in the days when I was shopping at Lina Stores and running a kitchen catering to media types, I interviewed a young chef, who had the usual City & Guilds qualifications and a fat sheaf of references from various catering colleges. “But how many sorts of mushroom can you name?” I asked him, cunningly.

“Field,” he replied. “And button.” He scratched his head. “Maybe just one more?” I prompted, encouragingly. He thought for a few moments, then his face brightened.

1) Soak the cèpes in warm water for 30 minutes, then drain, reserving the liquid. Clean the wild mushrooms by brushing away any mud and wiping the cap and stem with a damp cloth. Slice them, not too thin. 2) In a large frying pan, heat the oil and butter. Once the butter is foaming gently, add the garlic and fry for a minute or two. 3) Add the soaked cèpes and cook for another minute to combine the flavours.

4) Add the fresh mushrooms. Sprinkle with salt and pepper and cook, stirring occasionally, for 5 to 6 minutes, or until the mushrooms have released their water and are tender and glistening.

5) Add a little of the cèpe liquid and let it all bubble for another minute, then throw in the herbs. Serve on the toasted sourdough.